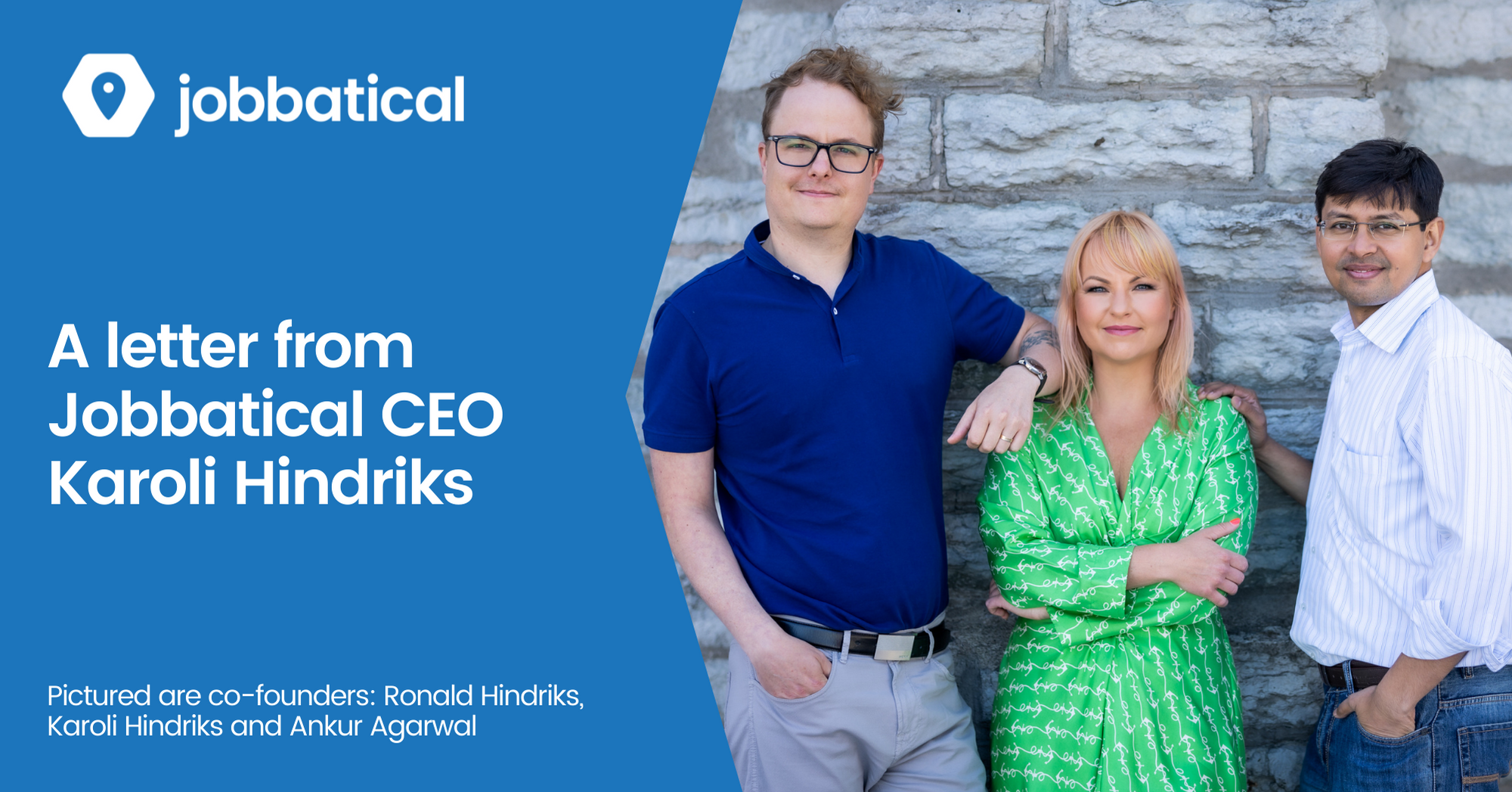 You’ve probably already seen the news making the rounds on social media—Jobbatical has just closed a €11.6m Series A to expand to thirty new countries over the next two years and make moving to a new country as easy as booking a flight.

Our aggressive growth has attracted investment from VC’s across the Nordics, Baltics, US, and Switzerland. This funding round, led by Inventure, will empower us to meet the demands of the 281m annual global worker relocations market and the rapidly growing digital nomad community. The round is also joined by our amazing partners at Union Square Ventures, Swiss Post Ventures, Karma VC, Metaplanet, Devotion Ventures, and angel investors Kristel Kruustük, Indrek Prants, Andres Kull, and Joe Zadeh, former Head of Airbnb Experiences.

The numbers speak for themselves, but they don’t quite show you the bigger picture of why Jobbatical exists and why everyone on this team is so relentlessly passionate about what we’re doing.

Like many good things in life, it all started with a half-accidental pun.

I came up with the word “jobbatical” years ago when I was thinking about something I found frustrating about the way we build our lives and careers:

For so many people, a job was a place they dreaded commuting to, sometimes for hours, just to sit in a cubicle and work even more hours for a boss they probably didn’t like. The grind was in charge of our lives, until perhaps one day, if we were lucky enough—and not everyone was—we were able to take a sabbatical.

Because a sabbatical was for fulfilling dreams—for traveling the world and expanding one’s horizons, resetting, and taking some time away from the rat race.

I saw a future where instead of being polar opposites, jobs and sabbaticals would merge into jobbaticals—people working for companies and missions they believe in and are excited about, from dream locations anywhere in the world. Expanding your horizons and building your dreams should be the default, not something you had to try to squeeze into a holiday.

I started Jobbatical to make it happen. At first, as a global job platform, we helped companies and talent find each other across the globe.

Then we learned that the problem with international hiring wasn’t the hiring itself. The job market was opening up fast, spurred on by the deepening talent shortage in both established and burgeoning tech hubs. People were on the move, businesses were casting wider and wider nets to find their dream hires. The big pain, it turned out, was the relocation and immigration process. Immigration policies were not managing to keep up with the new realities of human mobility.

And so, three years ago, Jobbatical pivoted and started building technology to fix this, with a platform that would make the relocation experience painless for employers and their international talent.

Seven months later, the pandemic hit. That’s when we learned that as a company, we’re not good at change—we are amazing at it. Some of our best product decisions were made because of the pandemic, giving rise to possibly the most scalable and advanced product in the borderless living tech industry today.

It all goes to show that the era of the jobbatical is in full swing. The global workforce is more mobile than ever, increasingly empowered to chase fulfilling jobs in locations they choose, with companies whose missions excite them.

And yes, I can bring the receipts to back up that claim.

Over the past year, we’ve started ~6000 relocation cases for people from 118 nationalities and enabled moves to 18 countries.

This has only been possible because of the ass-kickingest team in the known universe. I am incredibly excited to keep working with my all-star Team Jobbatical to scale our efforts.

And I want to say a massive thank-you to all our clients, investors, partners, and everyone else who has been following along as we tear down the red tape and continue to build a world that works better together.